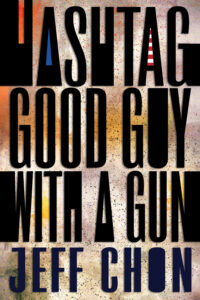 Hashtag Good Guy with a Gun is now available through Sagging Meniscus Press. Now available wherever books are sold.

“A very funny book about conspiracy theories, masculinity and the internet.”

“Its knotty plot is Pynchonesque in its implausibility and its characters’ motivations are often obscure, even to themselves. The deadpan tone is reminiscent of David Foster Wallace in his bleaker moments…a compelling and unsettling novel that explores the Trump era with considerable insight and wit.”

“Chon shines the multicolored light of his intellect onto ugly hot-button topics, which is the sort of risk-taking I seek and indeed revere in novelists, especially debut novelists, who have everything to lose by doing so.”

“This is a brilliant and wild satire that speaks to our particular American moment of toxic masculinity and gun violence. Jeff Chon’s debut is as smart as it is full of empathy.”

—Eric Nguyen, author of Things We Lost to the Water

“Chon’s punchy, acerbic prose weaves these people and narratives together, skipping backwards and forwards in time. The result is a chain of angst and aggression that seems unbreakable, in which bloodshed only begets more bloodshed. He depicts a world spinning out of control…. Eschewing easy sympathy and tidy resolutions to its dilemmas, Hashtag Good Guy with a Gun is a bracing, affecting novel that laments a society on the edge of madness.”

“Those looking for self-righteous debates about gun control with straw men will be disappointed. Chon focuses on the weaknesses that see violence as an expression of strength: sexism and racism, an obsession with identity that devolves into an ideological search for purity. ”

“Wacky theories about J. D. Salinger, MK-Ultra and big finance are passed under the table; guns are dealt like playing cards. It is the most successful novel I’ve yet read of the Incel generation. And most impressively, Chon makes you care about these damaged, dangerous lost boys.”

“Shockingly mirthful. Ambitiously essential. Wildly quotable. Jeff Chon has given us a novel that must be consumed for our own sake.”

“The problem, challenge, or joke is that if we use Scott’s way of seeing life as an eternal present as the key to how to read Chon’s novel, while also acknowledging that Scott’s logic is a little off, we have to admit that we may be a little off too. And this is the brilliance of the novel. . .Chon is the court jester here in Hashtag Good Guy With a Gun, accusing us all—Right, center/liberal and Left—of losing our perspective. That’s a tame way of putting it: America is the shithole country that Trump tried to scare us about.”

“Hashtag Good Guy With a Gun is a timely punch in the stomach you can’t ignore. You’ll laugh, scowl, and gasp to the last page, maybe walk away with some new insights about the bizarre and scary world we live in.”

“A biting satire of toxic masculinity in today’s America, as well as a scathing critique of American attitudes regarding gun violence, racism, homelessness, social media virtue signaling, and everything else. And it does it damn well.”

“Engaging and entertaining. The author has struck a fine balance between depicting a brand of masculinity as performatively toxic alongside revealing the innate personal anxieties such beliefs mask. An original take-down of contemporary issues where underlying causes are too often dismissed as unworthy of attention. A story that stands on its dark humour as well as literary merits, but which offers more for those willing to question why men such as these feel so desperately hard done by.”

“This book is well worth a read, it is one that I’ll be re-reading in years to come and I’ll be able to look back fondly at the time Trump lost the election and acted like a right tit.”

Advance Praise for Hashtag Good Guy with a Gun:

“A boots-on-the-ground dispatch from the suburban wastelands of Incel-vania (population: you), all told in the shadow of the Korean grim reaper. James Ellroy said noir is the genre of male self-pity, but there’s nothing to pity here in Chon’s smart, cogent, and morbidly comedic exploration of men’s breaking points. Ambitious, gripping, and snickeringly quotable.”

“Hashtag Good Guy with a Gun is one of the boldest, smartest, and weirdest books I’ve read in years. I haven’t seen anyone, anywhere, write so expertly, clearly, and empathetically about the ways online culture is wrecking young men. Jeff Chon pulls off a remarkable feat in this novel, tackling dark and frightening subject matter in a way that never feels overbearing or preachy. Plus, it’s funny.”

—Tom McAllister, author of How to Be Safe

“Hashtag Good Guy with a Gun is a rhizomatic literary thriller with bursts of Robert Anton Wilson’s cosmic comedy and sparks of Conrad’s darkness. Chon’s carefully crafted characters are the purple-hearted veterans of the culture wars, the feral philosophers and cagey sages of a post-truth #world. This is a nervy novel that will simultaneously frighten and delight.”

“Jeff Chon’s wide-ranging debut takes us deep down the rabbit hole. Chon’s web of characters seek meaning in the everyday as the chaos of our media-saturated world swirls around them. Hashtag Good Guy with a Gun bursts with humor, feeling, and timely commentary. Chon is an author you’ll want to follow.”