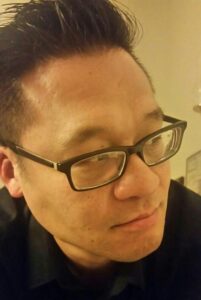 Jeff Chon is a graduate of the MFA program at St. Mary’s College of California, where he studied under Marilyn Abildskov, Susan Griffin, Samina Ali and Wesley Gibson. His stories and essays have appeared in The Seneca Review, The Portland Review, Barrelhouse, Juked, and The North American Review, among other fine places. His debut novel, Hashtag Good Guy with a Gun, will be released through Sagging Meniscus Press in May of 2021.

He currently lives in the Bay Area with his wife and children.